Income inequality is on the rise, a fact which many academics and commentators suggest is an important part of the election of populist figures like Donald Trump. And yet, studies show that people are actually becoming less concerned about inequality as it increases. In new research, Jonathan Mijs describes how inequality has reshaped the social landscape and how, as a result, many people are unaware of inequality’s true extent and believe that society is meritocratic – meaning that they feel that inequality is people’s own fault for not working hard enough.

Ours is a deeply unequal society. The level of income inequality today has not been seen since the Great Depression of the 1920s and 30s. In recent decades, economic growth has been captured by a small segment of society, whose fortunes have grown at a much faster pace than the rest of us; to the point where the top ten percent today takes in a third of all income and two-thirds of all wealth.

Now, this dramatic rise in inequality has not gone unnoticed. The topic has received plenty of attention in academia, in politics, and in the press. What is striking however is how, despite all the attention, people just aren’t that worried about inequality. 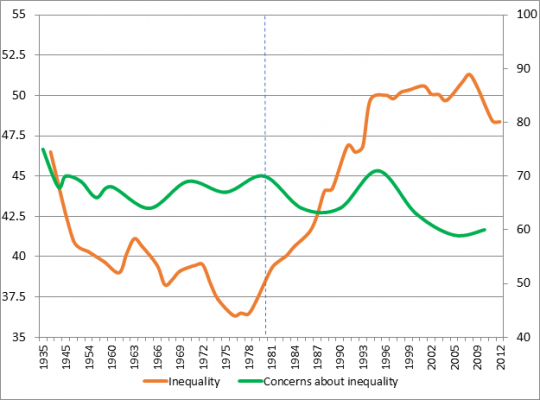 In fact, if we look at some of the most unequal societies in the West, it’s striking just how little inequality is a public issue. The US embodies this phenomenon: the same public that created the Occupy Wall Street movement voted a billionaire into office in 2016. That billionaire’s first order of business? Cut taxes for the rich. Mind you: the filthy rich. It’s easy to dismiss the US as an outlier, but it’s not. Rather, the US shows the trend: across the western world, greater inequalities go together with lower levels of concern. How do we make sense of this fact?

Read the rest of Jonathan J.B. Mijs’ LSE US Centre and USAPP