The New Era of Refugee Investing

The New Era of Refugee Investing

More than three years into the pursuit of the Sustainable Development Goals (SDGs), not one country is on track to achieve them by the 2030 deadline. This conclusion, reached in a recent Brookings Institution report, highlights the enormous human costs associated with not meeting these goals, and implores countries to do more. With heads of state slated to meet at the UN later this year for the first major progress check on the SDGs, it is high time we bring new and innovative approaches to economic growth and investing to bear on the world’s social challenges.

Refugees and forced migrants—a group that today amounts to a historic high of more than 70 million people worldwide—represent one such social crisis and are top of mind for many of us. Whether we’re reading about the turbulence in Yemen, Venezuela, or Syria, or at the US-Mexican border, or about any number of the 65 protracted displacement situations worldwide, we see suffering and hardships exacting a toll on millions of people. Indeed, forced migration is directly implicated in the attainment of nearly all the SDGs—even though the SDGs do not specifically address it. 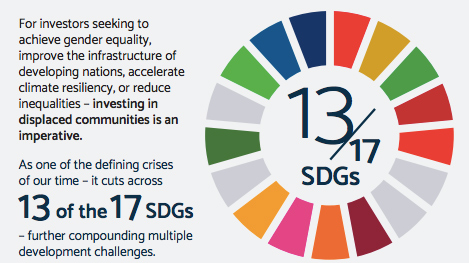 So how can we begin to turn these dynamics around? If we subscribed to the dominant narrative surrounding refugees, it would be natural to conclude that forcibly displaced populations represent a burden to host societies, drive instability, and weigh down development efforts. Certainly, investors most often view investment in refugees as risky and thus, a “bad bet.”

Yet, there is good reason to revisit these assumptions and to sharpen our analysis of the perceived problems, risks, and most importantly, the opportunities associated with forced migration. When we do, the facts that emerge tell a different story, one in which refugees are motivated, hard-working, resilient, and often entrepreneurial people, who build successful businesses and enrich the communities where they live. While forcibly displaced people face serious challenges, often stemming from underinvestment, and backward and restrictive laws, research shows they are loyal, creditworthy, and investable. In fact, a closer look at how investors are helping refugees fulfill their potential reveals enormous opportunity.

A Growing Market for Refugee Investments

The Refugee Investment Network (RIN) was established in 2018 to take this closer look at the manifold socio-economic issues affecting refugees, and to create new pathways for investment, jobs creation, and sustainable economic growth among forcibly displaced people. The RIN has set out to build the “connective tissue” to mobilize investment capital for refugee entrepreneurs. For our first major report, we interviewed entrepreneurs, impact and institutional investors, refugees, and humanitarians, as well as representatives from philanthropy, development, finance, business, and government to understand how best to invest in and with displaced people.

Our interviews, along with analyses of investment and refugee data, show that there is increasing interest in building the investment market around entrepreneurial refugees. They also revealed that first-moving investors come from a variety of asset classes and geographies, and have a range of returns and impact expectations.

The types of deals we’re seeing vary significantly. For example, many refugees face the stigma of their circumstances, as well as restrictive and discriminatory policy and regulatory environments, but in 2007, the Small Enterprise Assistance Fund (SEAF) looked beyond the news from Serbia and took a chance on Bosnian refugee Goran Kovacevic. At the time, Kovacevic was operating a grocery store chain called Gomex, with 16 stores and 306 employees. Boosted by SEAF’s 1.2 million Euro (about $1.4 million) investment, Gomex grew to 159 stores throughout Serbia, with nearly 1,000 employees.

Meanwhile, to mitigate both real and perceived financial risks, some investors are using “blended capital” and other creative financing structures in place of traditional investment approaches. For example, the private sector arm of the World Bank, the International Finance Corporation (IFC), and the Goldman Sachs 10,000 Women program partnered to create the Women Entrepreneurs Opportunity Facility (WEOF), a first-of-its-kind global loan facility for women-owned, small- and medium-sized enterprises. WEOF launched in 2014 with a $100 million investment from the IFC and $43 million from the Goldman Sachs Foundation. This initial capital incentivized other investors to co-invest in a previously unproven market and demonstrate the commercial viability of a new asset class, and ultimately led to targeted investments totaling nearly $1 billion. To date, WEOF has invested in financial intermediaries in 26 countries, including some of the world’s poorest and conflict-affected states. This capital has subsequently reached 50,000 women entrepreneurs with a goal of reaching 100,000 over 10 years.