Half of America will be obese within 10 years, study says

Home/Health/Half of America will be obese within 10 years, study says

Half of America will be obese within 10 years, study says

If America does not collectively adopt healthier eating habits, over half of the nation will be obese within 10 years. Even worse, one in four Americans will be “severely obese” with a body mass index over 35, which means they will be more than 100 pounds overweight.

That alarming prediction, published Wednesday in NEJM, was the result of a study analyzing 26 years of self-reported body mass index (BMI) data from over six million American adults.

Considering the challenges of battling weight loss, that’s devastating news for the future health of our nation. “Given how notoriously difficult obesity is to treat once it’s established, you can see that we’re in an untenable situation,” said Aviva Must, chair of Tufts University’s Public Health and Community Medicine, who was not involved in the study. “The societal cost is high,” she said, “both in terms of obesity-related health consequences and healthcare expenditures which could bring us to our knees.”

One of the first research efforts to drill down to the state level, the study found that 29 states, mostly in the South and Midwest, will be hit the hardest, with more than 50% of their residents considered obese.
But no part of the country is spared — in all 50 states, at least 35% of the population will be obese, the study found.
“What’s even more concerning is the rise in severe obesity,” said lead author Zachary Ward, an analyst at Harvard Chan School’s Center for Health Decision Science. “Nationally, severe obesity — typically over 100 pounds of excess weight — will become the most common BMI category,” Ward said. “Prevalence will be higher than 25% in 25 states.”
Currently, only 18% of all Americans are severely obese. If the trend continues, the study said, severe obesity would “become as prevalent as overall obesity was in the 1990s.” 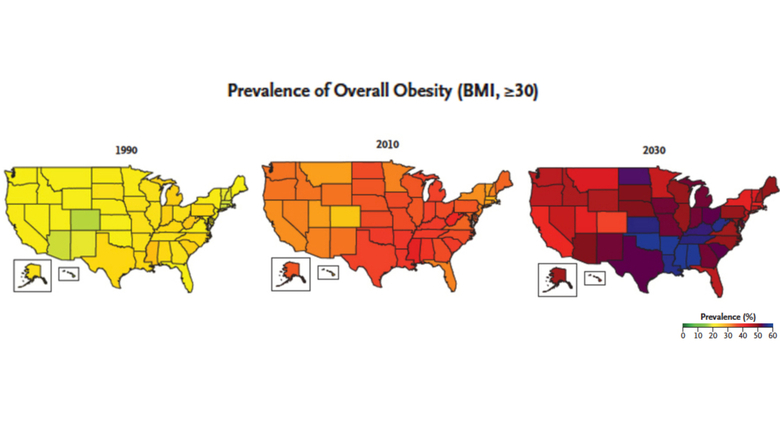