1 in 10 Americans don’t have enough food. The pandemic is making things worse

Tens of millions of Americans were already wrestling with having enough food to eat before the coronavirus came along. Enter a pandemic that launched an historic recession and experts say that need has only grown.

For three years, Jennifer Lawrence has volunteered at the food bank at St. Luke Methodist Church in Tupelo, Mississippi. People who come to her are scared, not only about having enough food but also how they’re going to make it from one day to the next in the middle of COVID-19, she said. One woman in her 70s is now raising her grandchildren after her own child died, Lawrence said. “Some of them are at their wit’s end,” she said, adding that her clients tell her, “‘I don’t know how I’m going to make it. I don’t know how I’m going to pay my bills.’”

Data is starting to catch up to the real-life fallout of dueling health and economic crises, and shows that households of color and those with less income are disproportionately affected so far. In late August, about one in 10 Americans said they did not have enough food in the last seven days, according to new survey data from the Census Bureau out this week. But mounting data suggests those numbers are going up. The Census data also revealed rising in food insufficiency among children over the summer, from 16.8 percent in mid-June to 19.9 percent by mid-July. 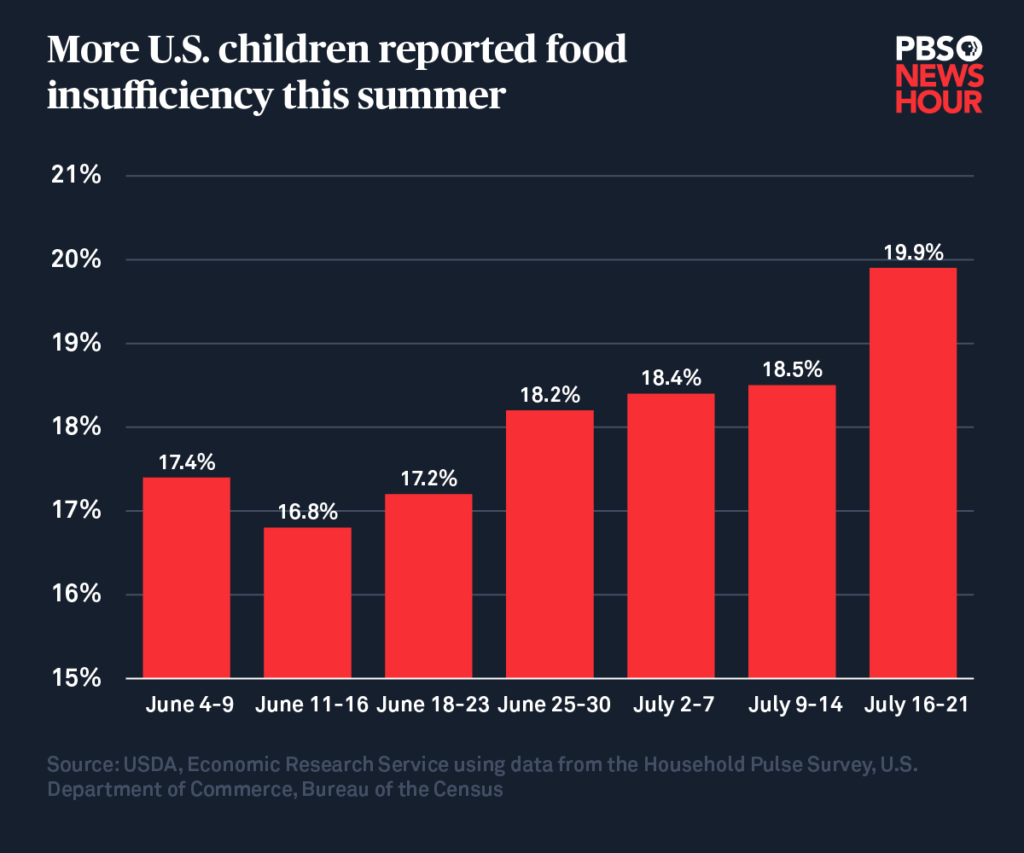 In New York City and Los Angeles, roughly one-fifth of residents said over the course of July that they had serious difficulty getting enough food to eat. In Houston, a third of respondents had trouble affording food, according to a poll from the Robert Wood Johnson Foundation, NPR and Harvard’s T. H. Chan School of Public Health

And a slew of COVID-19 relief packages — from unemployment assistance to housing protection — are set to expire by the end of September, weeks ahead of the 2020 presidential election, leaving millions of people vulnerable to worse economic and health outcomes.

Food is one of the first costs people skimp on to try and stay afloat amid turbulent financial straits, and one of the last basic needs to recover once a crisis eases. What someone spends on food “is something that is elastic, as opposed to — your rent is your rent,” said Elaine Waxman, senior fellow at the Income and Benefits Policy Center at the Urban Institute.

That deprivation can have lasting effects — trouble getting enough food to eat can lay the foundation for chronic illness and reduced health outcomes later in life.

Read the rest of Laura Santhanam’s article here at PBS.org